Home News BYND Stock Down 0.18%, Beyond Meat Partners with Alibaba to Enter Chinese... 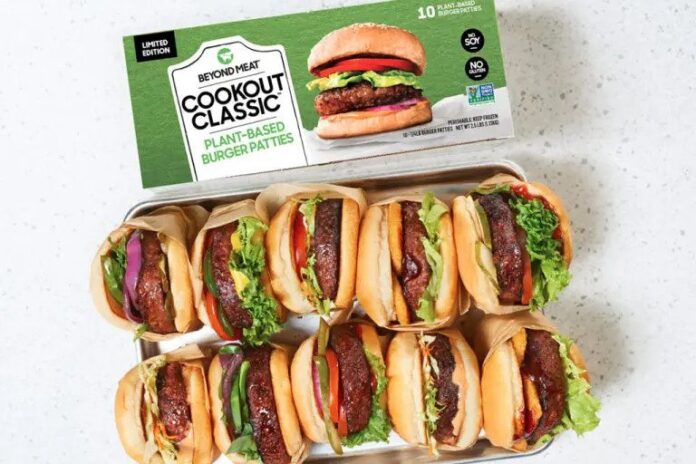 Before Beyond Meat announced its partnership with Alibaba, the firm revealed another deal in China deal with the Sinodis food distributor.

Beyond Meat Inc (NASDAQ: BYND) stock continued to rise these days. This is after the meat alternative firm announced it would partner Alibaba Group Holding Ltd (HKG: 9988) retail store in China to sell its products.

Beyond Meat burger in their partnership with Alibaba will see their burger get sold in 50 Freshippo grocery stores in Shangai. Plans are also underway to extend sales of the burger to more Freshippo stores in Beijing and Hangzhou by September.

Thanks to this partnership, Beyond Meat would conveniently enter China’s supermarket industry. “We are proud to partner with Alibaba’s Freshippo, a dominant player in the retail space, to introduce our hallmark Beyond Burger to home cooks throughout China,” Beyond Meat CEO Ethan Brown said in a press release.

The burger would be available for consumers via mobile order and delivery on Freshippo’s mobile app. The product in Shangai would be sold in the frozen meat section to stay in line with Beyond Meat strategy to draw customers who sell Meat.

Freshippo’s Jiayu Zhao, head of merchandising said they had experienced increased interest in plant-based MeatMeat among their consumers.

Beyond Meat, Alibaba and Other Partners in China
Before Beyond Meat and Alibaba partnership, the firm in June announced a distribution deal with Sinodis food distributor also in China. Also, Yum China mentioned they would partner the plant-based burger firm to sell their burger for a while at KFC, Taco Bells, and Pizza Hut stores in China.

However, its partnership with Alibaba now is somewhat a game-changer as they have access to larger customers’ base in many ore locations in China. Data from Euromonitor reveals that China consumes around $170 billion worth of MeatMeat yearly, making them the highest consumer in the world. But then, the Chinese are looking for plant-based substitutes to replace MeatMeat.

By projection, China’s alternative meat market would grow to about $12 billion by 2023 more than $10 billion; it was projected to hit in 2018.

BYND composite rating stands at 87 with 70 EPS rating. Earlier this week, the share found support at their 50-day line with its relative strength line plunging since last month, showing it already lagged the S&P 500.

HECO Will Be Integrated into Cross-Chain Scaling Solution BTTC

THE MOST KNOWN MURAL OF GLOBAL PANDEMIC IS GETTING LISTED ON...