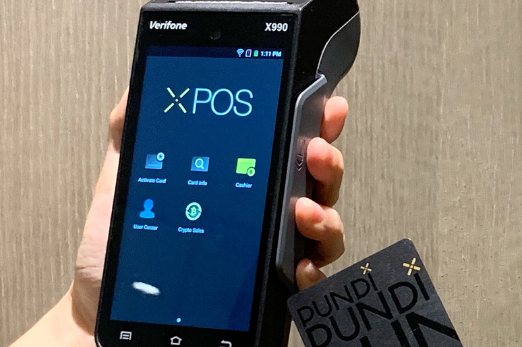 Singapore-based blockchain company Pundi X claims it has made another step towards cryptocurrency adoption by integrating its technology into traditional point-of-sale (PoS) terminals, released by a major provider of such devices, U.S.-based Verifone.

According to Pundi X, its XPOS (their point of service device that accepts cryptocurrencies) module has been integrated on Verifone’s X990, the latest Android-based point of sale terminal produced by the PoS company. Now, these devices can process cryptocurrency payments along with traditional transactions, the blockchain company said, adding that this will allow “a wider network of retailers to accept payments in cryptocurrencies.”

Thanks to the XPOS, the Verifone X990 will be able to accept a number of cryptocurrencies as payment options, such as BTC, ETH, BNB, KCS, KNC, XEM , and NPXS at any retailer that has the Pundi X Verifone X990 installed.

“The XPOS integration is an essential step to link the Pundi X payment ecosystem with one of the most extensive payment networks in the world”, the company said in a press release. The point of this integration is that, with the the XPOS module installed, the Verifone X990 will function like the XPOS, “as all of its features will be installed in the traditional terminals”. This means that customers who have Pundi XPASS cards or the XWallet app can do transactions with the retailers who are using the X990 in the same way they do with XPOS partner merchants. Furthermore, the XPOS will provide an exchange rate between fiat and cryptocurrencies automatically during the transaction.

To have XPOS module in X990 and other upcoming Android-based PoS models, merchants will be required to contact their local VeriFone or Pundi X distributors for installation, according to the announcement.

Verifone is considered as one of the historical pioneers in credit card terminals. Established in 1981, it was acquired by Francisco Partners for USD 3.4 billion in 2018. The POS company claims it has shipped over 30 million products, which range from integrated POS systems to countertop and PIN pad devices, to more than 150 countries.

Yiannos Papadopoulos, Asia Pacific President at Verifone, said: “Having blockchain technology in the X990 will revolutionize how our partner retailers transact with a new generation of customers carrying cryptocurrencies.”

Meanwhile, In October 2018, Pundi X unveiled the XPhone, the first fully-functional blockchain phone with a unique Operating System called f(x), making the first blockchain call ever. At the end of April this year, however, Pundi X blamed the bear market and long certification process for missing their expansion targets, not being able to ship as many XPOS’s as planned and postponing their XPhone launch, but claimed that their long-term goals remained unchanged. At pixel time (11:13 UTC), NPXS trades at c. USD 0.000622 and is down by almost 8% in the past 24 hours, by 23% in the past week and by 29% in the past month.