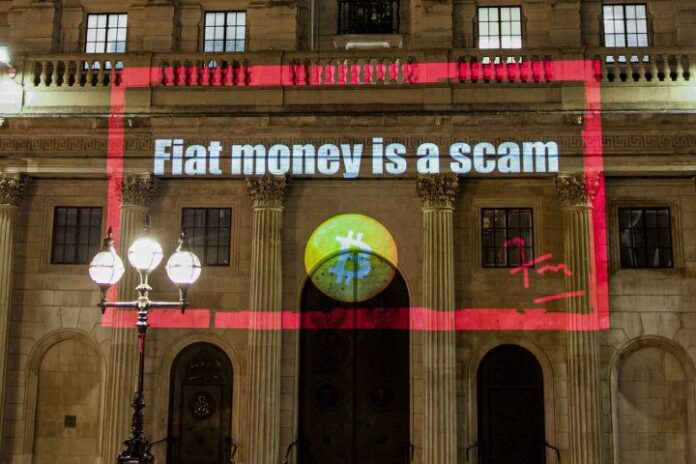 A mysterious Bitcoin (BTC)-loving projectionist has been lighting up the London nights with fiat-bashing, BTC-themed slogans.

The projectionist’s activities have been chronicled by Dominic Frisby, a comedian and actor who rose to fame with a viral video about Brexit named “17 Million F**k Offs.”

In recent years, Frisby has become a libertarian author and a crypto enthusiast. And now he has become the chronicler of the night-time projectionist and their feats that have involved plastering bright slogans such as “Fiat is a bubble, bitcoin is the pin” onto the facade of the Bank of England (BofE) in London’s Threadneedle St.

Another slogan read: “Printing money is stealing from the poor.”

And the BBC’s Broadcasting House headquarters was also subjected to a BTC-themed nighttime projection, with a bright slogan reading “Don’t vote, HODL” – ahead of local elections held on May 7.

Almost predictably, there’s a non-fungible token (NFT) twist to this BTC tomfoolery: a photo of one of the Frisby-snapped light attacks (reading “bitcoin fixes this”) has already sold on the Rarible platform, which also hosts other politically charged light show NFTs.

You can even buy a very topical money printer go brrrr-themed work, plastered ironically all over the front of the BofE. As MoneyWeek reported this week, the UK is currently sitting on its biggest pile of debt since World War 2.

The Financial Times’ City Insider columnist turned up the sarcasm in its response. The newspaper was clearly feeling a rush of that Friday feeling when it asked: “Who’s the secret crypto projectionist? It’s a question asked by almost no one.”

The columnist also noted that it was a “remarkable coincidence” that Frisby had happened to be “passing the Bank of England at the right moment over several successive nights” – and also managed to photograph the BBC incident.

“[Frisby’s] Twitter feed also includes digs about Boris Johnson, [the British Chancellor of the Exchequer] Rishi Sunak and [London mayor] Sadiq Khan projected on to their offices, all featuring the same scrawled signature in the bottom-right corner that appears to begin with an ‘F’ and end with a ‘Y.’”

Cryptonews.com, playing Dr. Watson, would like to point out that the “Y” in question might well be a “Z” – the NFT tokens’ creator’s handle is “Fraz.” And “Fraz” claims that their mission is “smashing the system with irreverent projections and unacceptable songs.” Songs like “17 Million F**k Offs,” perhaps?

The BTC advocate and Quantum Economics analyst Jason Deane noted that while he “loved” the projections, the message may be lost on non-crypto folk, remarking on Twitter,

“In my experience of presenting to [thousands] of people on this subject, almost no-one knows what ‘fiat’ money is!”

Frisby’s latest post captures the projectionist’s latest effort: Projecting a slogan reading “make love, not laws” onto the side of Big Ben at the Houses of Parliament.